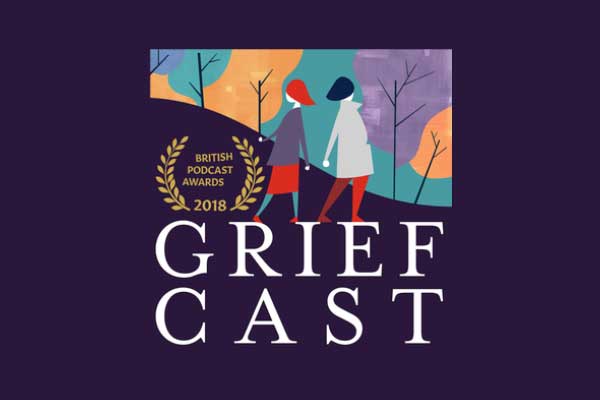 Each week Cariad invites fellow funny people to talk about the death of someone they loved – Sarah Pascoe, David Baddiel and Bobby Mair to name a few. But Griefcast isn’t an hour of weeping. Much healing comes from the relief and release of shared laughter about death.

Cariad is warm candid and honest about death in her interviews. The idea for the Griefcast came about in 2016 before the birth of Cariad’s first child. She started the podcast as a side project hoping “maybe 10 people would listen” but quickly it became a chart-topping hit.

At the 2018 British Podcast awards, Griefcast won the Best Entertainment and Best Interview gongs, as well as Podcast of the Year.

We know from the stories and emails we receive at Eulogy For Life, that talking about death in a uplifting way helps ease the heartache of loss.

Griefcast gives positive, upbeat examples of how others deal with loss and grief.

Comedian Robert Webb makes listeners laugh with an impression of his late grandma.

Writer and comedian Sarah Pasco talks about the death of her grandfather as a child.

Stand-up writer Lou Conran talks about the death of her baby when she was just five and a half months pregnant. They discuss grief, ashes and going to the right funeral.

No comments to show.
We use cookies on our website to give you the most relevant experience by remembering your preferences and repeat visits. By clicking “Accept All”, you consent to the use of ALL the cookies. However, you may visit "Cookie Settings" to provide a controlled consent.
Cookie SettingsAccept All
Manage consent